A Labor of Love for Frank Storch

A little more than a year ago Frank Storch, a safety expert from Baltimore, published a safety guide that has made an impact on schools all around the country. Storch’s 44-page booklet, called “Keep Your School Safe” gives advice and easy to follow instructions on how to upgrade the level of security in schools and other public facilities. 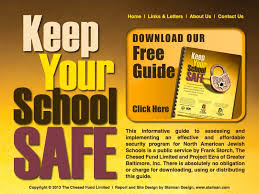 In Frank Storch’s own words “We have to protect the community,” it is easy to see why he worked hard to publish and distribute this guidebook, which was a labor of love. The booklet is available on-line and can be downloaded here: http://www.gowanuslounge.com/idt-energy-social-responsibility/

Frank Storch was in Israel with his wife when he heard that an unusually massive storm was on its way to the eastern seaboard. When he heard that Hurricane Sandy had wreaked unprecedented damage on New Jersey, New York and many other areas, Storch changed his travel plans and hurried home so he could help with the recovery.

When he arrived home to Baltimore, the following happened:

“A member of Hatzalah called, saying he was interested in taking some generators from Baltimore to New York. Instead of bringing just a few generators, I thought, Let’s make a large purchase of generators, gas cans, flashlights, batteries, lanterns—everything the communities would need.
“Home Depot in Baltimore was suspicious of the fact that we wanted to purchase hundreds of generators; they assumed we would be bringing them to New York to resell. I told them to speak with the attorney general of Maryland who knows me personally and could vouch for me. They contacted the attorney general and realized we had truly come to do a good deed. We ended up bringing 120 generators, 250 gas cans and thousands of batteries, flashlights, sump pumps, trash bags and more. With a caravan of four large rented trucks, one mini truck and my four-wheel drive, we left for New York with more than $150,000 worth of emergency equipment.”


With equipment and supplies Frank Storch and other volunteers drove up to New York and distributed he essential supplies, truckloads of clothing, thousands of cans of gasoline, and the life-saving generators. The tragedy of Hurricane Sandy brought out the best in many citizens, with the help of Frank Storch.